A couple of announcements from your friends at Coffin Comics and Lady Death Store! LADY DEATH 21ST ANNIVERSARY SALE: THIS WEEKEND ONLY! It’s Lady Death’s 21st birthday and this calls for a celebration! This is a great time to pick up your favorite Lady Death books and merchandise because from NOW through Sunday, March 1, 2015, everything on Lady Death Store is 21% OFF at Lady Death Store! We apologize

Your Undead Diva has a couple of important announcements:   1. CHAOS RULES #1 KICKSTARTER The Chaos Rules #1 Kickstarter is still going strong, with over $55,000 pledged! We can’t thank you guys enough for all the support you have shown over the last couple of weeks! We are officially at our half-way point in the campaign, with three stretchgoals already met!           To recap, every backer

The Lady Death: Chaos Rules #1 Kickstarter Campaign has been a HUGE SUCCESS so far! In just a little over an hour when we launched on February 4, we reached goal and a little over a week later, we’re creeping up on $50,000 in funding! Thanks to everyone who has pledged so far! If you’re still thinking about pledging, please do so! Every little bit counts! Click here for live link to the

2015 marks the year that we bring Lady Death back to the sword-wielding bad-ass that you all loved from the Chaos Comics! days! The Lady Death: Chaos Rules #1 Kickstarter campaign is doing GREAT and it’s all thanks to our loyal FIENDS from across the globe! We truly appreciate everyone’s support! All backers in this campaign are an important part to making this brand new story possible! Haven’t checked

Lady Creator Fills in the Blanks Lady Death has a long and storied history in comics, but also a multitude of publishers. We caught up with Lady Death creator Brian Pulido to learn exactly what’s going on.   Q. We are here during the Kickstarter campaign of Lady Death: Chaos Rules #1 from your imprint, Coffin Comics and wanted to understand the recent behind-the-scenes of the character. Lady Death

WOW!!! We’re overwhelmed by the support we’ve gotten in the Chaos Rules #1 Kickstarter so far! We met our first stretch goal of $30,000 late last night and because of that, every backer that pledged $20 or more will also receive the exclusive 6.25×10″ Chaos Rules #1 Print by Dheeraj Verma! But with 27 days to go, we’re still not done!!! Our next stretch goal is at the $40,000 level and we meet 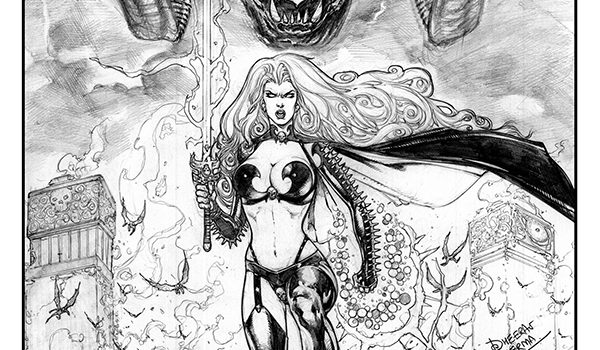 The Chaos Rules #1 Kickstarter is well underway and we’re already 150% funded! Thanks again for everyone’s loyal support! We’re pleased to announce that we’ll be adding our first STRETCH GOAL to the Kickstarter momentarily: If we reach a stretch goal on our campaign of $30,000, we will be sending out a FREE Limited Edition Chaos Rules #1 6.25×10″ Print by Dheeraj Verma with every pledge of $20 or greater! This