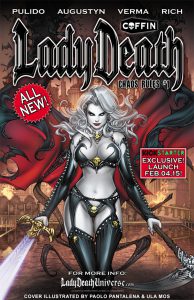 The Lady Death: Chaos Rules Kickstarter launches on February 4 at 7:00PM Mountain Standard Time (Arizona) – that’s just 4 four days away! Look out for a reveal of all of these rewards in the coming days!

We have been fielding a lot of inquiries lately from regulars regarding placing reservations on the Kickstarter rewards. We’d like to say that we’d be delighted to do so, but we unfortunately cannot. Part of the agreement that every entity creating a project on Kickstarter is that they have to maintain exclusivity on Kickstarter-only rewards for the duration of their campaign. So basically, in order to get one of the Kickstarter exclusive rewards, you have to pledge through Kickstarter and we cannot conduct private sales. We apologize in advance for this, but we do need to follow the rules in order to keep our project in good standing with Kickstarter and make Chaos Rules #1 a reality.

In preparation of our upcoming Kickstarter, here are a couple of tips for pledgers:

1. We will do our best to communicate the direct link to the Kickstarter page as quickly as possible when we launch on February 4 at 7:00PM MST (Arizona). But as an alternative, if you follow this link (it doesn’t work yet because the project isn’t live yet), you’ll be taken directly to Brian’s Kickstarter Project Page and you should be able to find the campaign from there!

2. In order to pledge on a Kickstarter campaign, you must have an account set up with Kickstarter. To do this, visit this page! We strongly recommend signing up for a Kickstarter account ahead of time so that you don’t miss out on some of our limited rewards!

We’d like to take a moment and THANK YOU ALL for your loyal support of the upcoming Chaos Rules #1 Kickstarter! Believe it or not, we’ve actually been working on this campaign for several months now! We really hope you like what we have put together for you! Every little bit helps in making Chaos Rules a reality. This is the FUTURE of Coffin Comics, FIENDS!

And if you’re local to Arizona, please show your support by coming to our Kickstarter Launch Party at Jesse James Comics! Freddie Nova will be appearing as Lady Death and fire dancer Heather Nance will bless Lady Death and Coffin Comics! The party starts at 6:00PM MST (Arizona) on February 4! 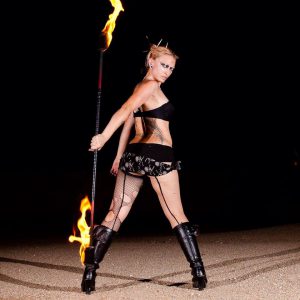 You can RSVP to this event by visiting this page on Facebook! We’re very excited to see you all!