All-new original graphic novel – the deadliest one yet!

SCOTTSDALE, AZ (January 8, 2015) – Hot on the heels of the monumental success of Lady Death: Damnation Game #1, Coffin Comics announced today that an all new Lady Death story entitled Extinction Express #1 will be launched via an exclusive Kickstarter campaign on February 3, 2016 at 7:00PM MST and run for thirty days. 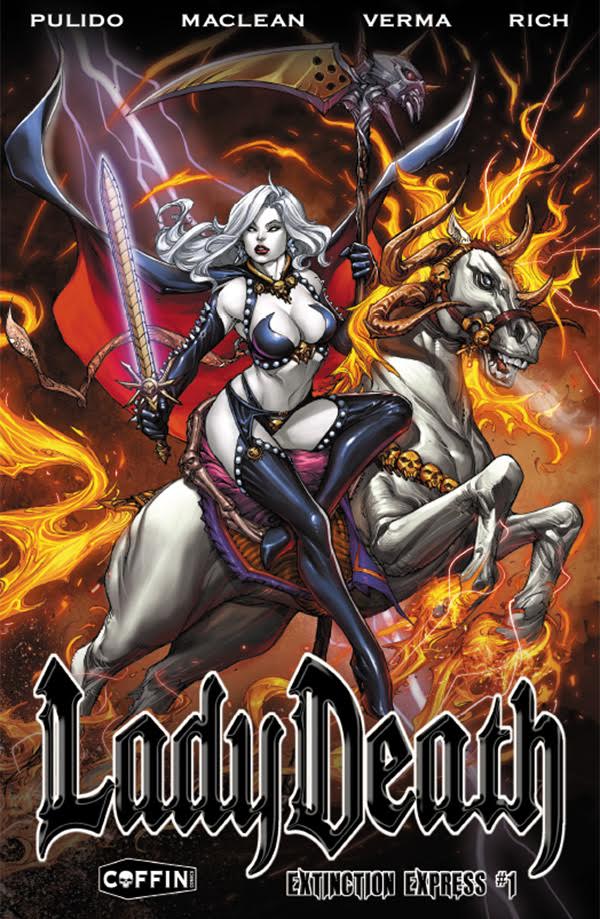 In Extinction Express #1, the Hellbourne Elders dispatch Atrocitas, an insane angel/demon hybrid assassin to destroy Lady Death for once and for all. But their epic confrontation proves tragic for a beloved character and sets in motion events that will change Lady Death’s undead life forever! Is this the road to extinction? Featuring the diabolical return of Hellwitch and the first appearance of a major new character in the Lady Death Universe.

“Get out your handkerchiefs, cause tears are gonna flow with this story,” says creator Brian Pulido.

But that’s not all. Because you demanded it, Coffin Comics will also offer the brand new LADY DEATH CLUB! Why? Because everyone deserves more Lady Death in their life!

Experience the next chapter in Lady Death’s undead life! Stay tuned for more preview art, interviews with the creative team, Kickstarter reward announcements and much, much more as we barrel toward the Kickstarter launch!

Lady Death was created by Brian Pulido and debuted in Evil Ernie #1 in 1991. The first Lady Death solo series debuted in 1994. Since then, Lady Death has appeared in over 100 comics in eight languages, selling over 20 million copies worldwide.

Coffin Comics is the final resting place of Lady Death.