LADY DEATH: CATACLYSMIC MAJESTY #1 (CHAPTER 13) launches on Kickstarter on Wednesday, February 17th at 7:00 PM MST (9:00 PM EST) (just two weeks away!), so I had to get more details from the man himself – Brian Pulido!

Brian Pulido is the creator, writer, and publisher of Lady Death, and he took the time in his busy schedule to answer a few questions for me about the upcoming Kickstarter! 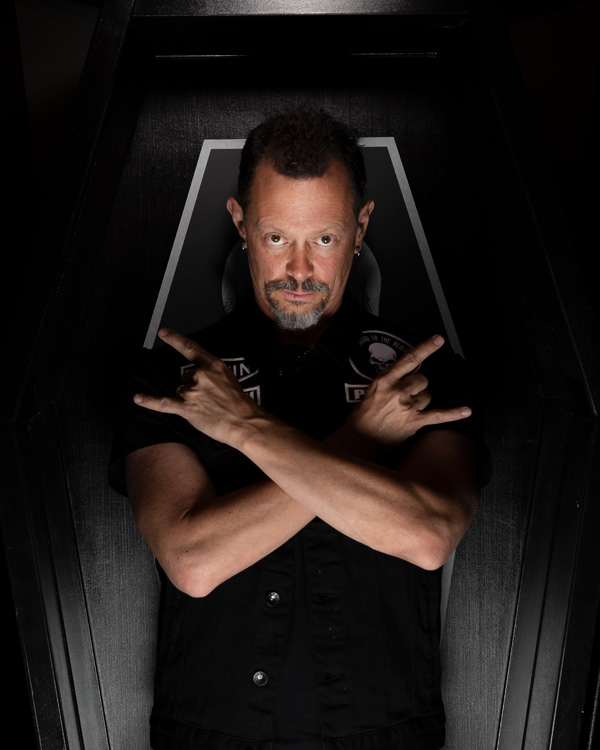 Brian Pulido: Insurrectus, our extinction-level villain poses a threat to all humanity. I thought the term “Deathocalypse” communicates the threat he poses to all the characters we know and love, and many we are about to introduce – or re-introduce – to readers and collectors! CC: The astute reader will notice that there have been three supernatural engines within the Lady Death stories. The first, The Hades Engine, appeared in Damnation Game. The second supernatural engine, The Perdition Obelisk, appeared in Apocalyptic Abyss. And the the third supernatural engine, The Shadow Engine, appeared recently in Treacherous Infamy. What can you tell us about these supernational engines?

BP: In the wrong hands, these engines pose a grave threat, and I am sorry to say, Insurrectus possesses them. What will he do with them? 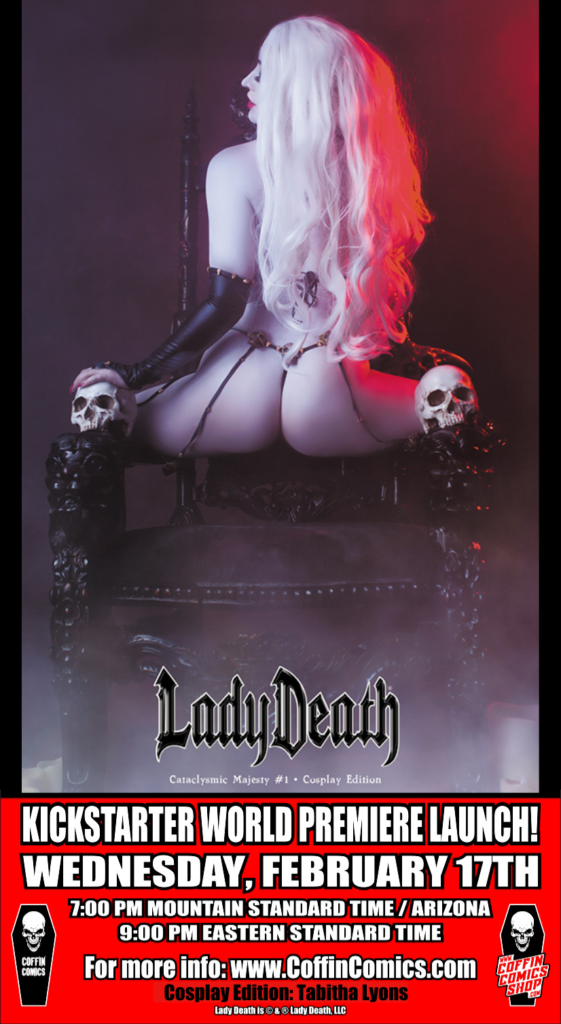 CC: First, you introduced Johnny Devlin (Devilock) in Malevolent Decimation and now Mad Mike Morgue in the upcoming LADY DEATH: CATACLYSMIC MAJESTY. What can you tell us about these new male horror characters you keep coming up with?

BP: Mad Mike is an undead grave digger hiding out in a cemetery in Chicago, along with his rat pal, Ratzo. He is also a major, ultra-violent ass kicker courtesy of his supernatural “Kill Fists” (nicknamed “Frick” and “Frack”). They are on the run from a shadowy organization nicknamed “The Frankenstein Factory.”

Did I mention that Ratzo, the rat speaks English?

Whereas Johnny Devlin aka Devilock has a somber, tragic vibe to him, Mad Mike Morgue is an over-the-top, cocky metal head. There is a fun, insane vibe to him and his horror adventures. It is fun for me to tickle that creative itch that I was so well known for with Evil Ernie (RIP) with my new guy, Mad Mike.

I plan to spin both characters off into their own stories. 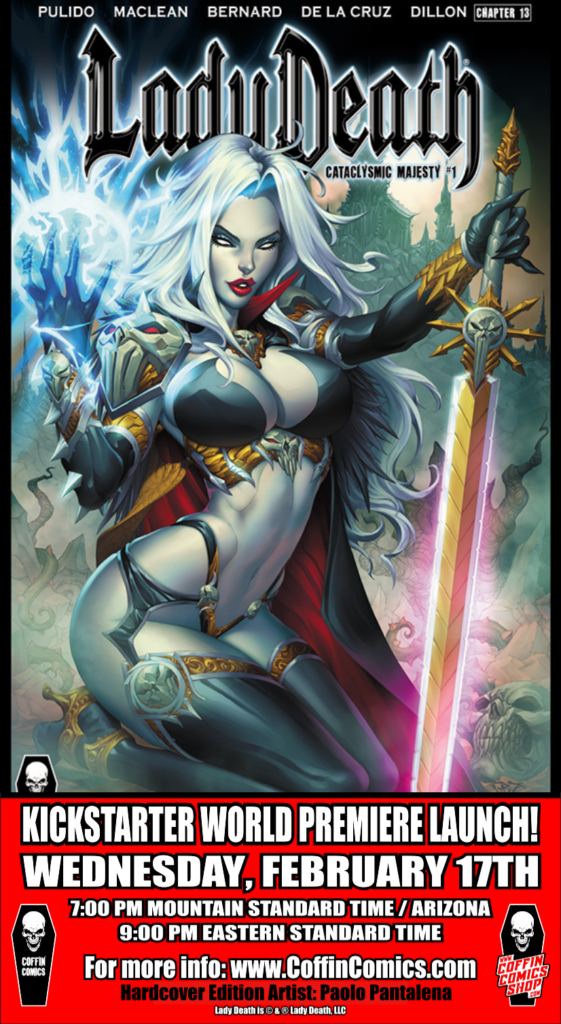 BP: Based on our track record, I’d like to think that Coffin Comics is a trustworthy company that delivers on our promises, and if we cannot, we are transparent about it. Also, we are utterly committed like crazy people to the quality of the comic books and merchandise we make.

We are dedicated to delivering value for people’s hard-earned dollars.

We are also all about fun and engaging crowdfunding campaigns. Given all our circumstances, we like to bring fun to everything we do and to keep unveiling surprises.

From a story telling perspective, we are committed to unfolding engaging stories with terrific art, color and lettering.

We have such a blast doing it, I hope it shows. 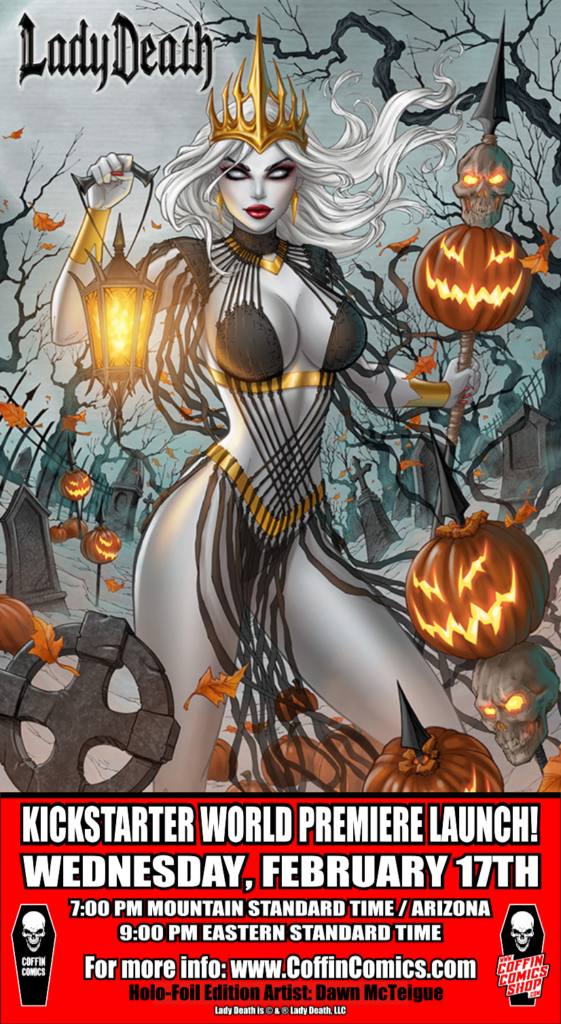 BP: I realize by now our long-time fiends know this but it bears repeating: Expect the unexpected!
In just 2 weeks, we kick off DEATHOCALYPSE by launching LADY DEATH: CATACLYSMIC MAJESTY #1 on Kickstarter on Wednesday, February 17 at 7:00PM MST / 9:00PM EST!

DEATHOCALYPSE is the year-long companywide event, culminating with HELLWITCH vs. LADY DEATH: WARGASM #1!

It’s about to get CATACLYSMIC!