Lady Death: Necrotic Genesis is only 4 weeks away from launching on Kickstarter!So we sat down with Lady Death co-writer Mike MacLean to find out what juicy secrets we can learn! 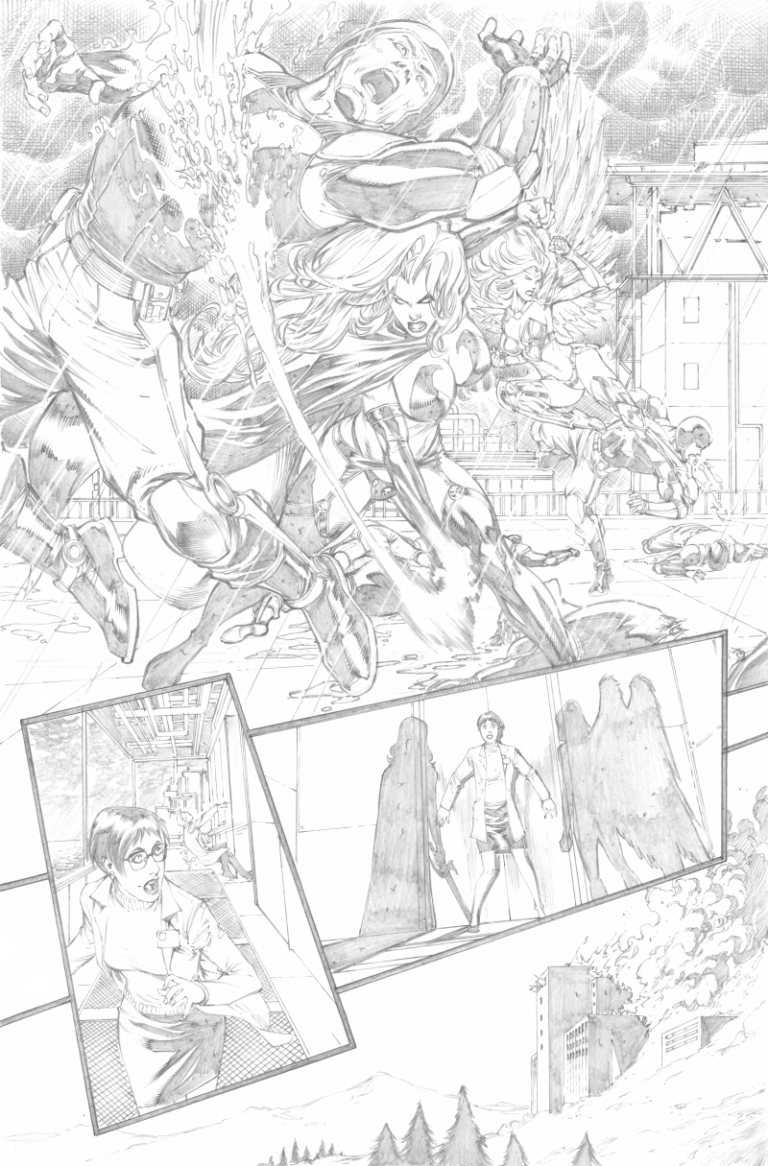 Coffin Comics: Lady Death: Necrotic Genisis’s storyline kicks off the World War Death’s companywide event. What can you tell us about that?Mike MacLean: It all started with a WTF moment in Lady Death: Nightmare Symphony. After retrieving a blood sample from our very own diva of death, a HALO drone returned to the shadowy bio-tech lab. Flash forward twenty years, and HALO has created a cadre of supernatural assassins, cloned from Lady Death’s DNA. But some of those clones refused to be HALO‘s killer slaves and escaped to every corner of the globe. World War Death follows HALO‘s ruthless hunt for these runaway rebels, a storyline which bleeds out of Lady Death: Necrotic Genesis and Diabolical Harvest to stain the pages of La Muerta: Primeval and Hellwitch: Forbidden. The books will explore a more personal tone than the Deathocalypse saga but will have plenty of brutal fight scenes, sexy encounters, and supernatural thrills. I promise you won’t be disappointed.

CC: Sworn Nation is buzzing with the new character Lady Virtue. What do you have in store for us?MM: Don’t let the name fool you. Lady Virtue is one bad bitch. The media has called her HALO‘s crowning achievement—a superhuman protector of humanity, as righteous as she is gorgeous. But in reality, Lady Virtue is a kill-crazy psychopath with the blood of an ancient death god surging in her veins. Driven insane by cruel experiments, she seeks to dominate and destroy anyone who gets in her way, including Lady Death. I know Coffin fans are going to love to hate her.

CC: What can you tell us about these mysterious “White Reapers”?MM: If you put Lady Death’s DNA in a blender and mix it with fallen angel blood, the result is a White Reaper. They are clones, bred to be HALO‘s private army of supernatural killers. However, the reapers refused to be slaves and escaped. Now the HALO corporation has vowed to hunt them to extinction.

CC: What can you tell us about the character Matthias?MM: Old school FIENDS can tell you Matthias is the father of Lady Death. Born in medieval times, his lust for power led him to raise a demonic army and march against the Lord of Hell. Having returned to Earth, Matthias runs the HALO corporation, a conglomerate secretly bent on world domination. Matthias will stop at nothing and sink to any depraved depths to satisfy his ambitions, even if it means destroying his own daughter.

CC: Why should someone new to Kickstarter back this new Lady Death Kickstarter?MM: If you are new to crowdfunding, I can understand your hesitation. But rest assured, Brian Pulido and the Coffin Comics crew has literally fulfilled DOZENS of successful campaigns. Lady Death: Necrotic Genesis will offer a well-crafted story, astounding interior art by Diego Bernard and Ceci de la Cruz, super cool collectible editions by the best cover artists in the business, and a hurricane of fun (and free) bonus items. But be warned; if you read Lady Death your life may never be the same.

CC: Do you have anything else you’d like to add for the Fiends and Sworn Nation?MM: It’s a dream come true to work on these books, and you lunatics make it all possible. For that, you have my eternal gratitude. SWORN!

ONLY 2 WEEKS UNTIL SWORN FEST! GET YOUR TICKETS TODAY!
LADY DEATH DAY – RECAP AND WINNERS!