After a year of extensive touring in celebration of Lady Death’s 20th Anniversary, and with the recent news of Brian Pulido’s return to sole ownership of Lady Death, Coffin Comics is thrilled to announce a new and exclusive product just in time for the holidays! 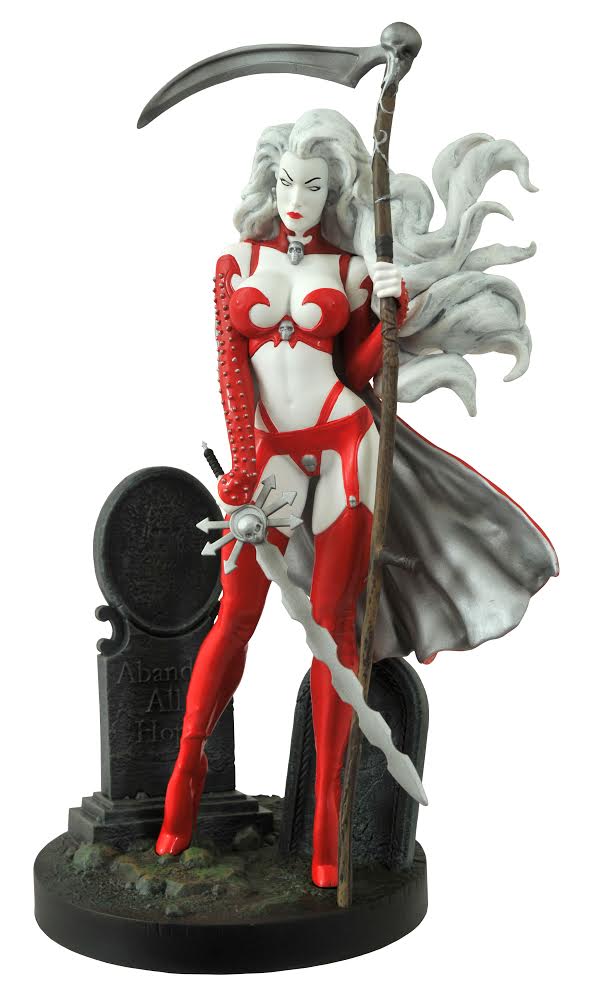 A LadyDeathUniverse.com exclusive! A Diamond Select Toys Release! The Lady Death III PVC Statue – Scarlet Edition is limited to 200 serially hand numbered statues and comes signed by creator Brian Pulido with a Certificate of Authenticity. This is the one and only variant statue of the Lady Death III PVC statue.

Based on the cover to Lady Death: The Reckoning #1 (Dark Queen Edition) by Richard Ortiz, this 9-inch PVC statue depicts Lady Death armed with both a sword and a wicked scythe. Standing on a sculpted base, Lady Death rules! Sculpted by Sam Greenwell!

Makes a terrific and unique holiday gift for the Lady Death fan in your life!

Preorders for this exquisite piece will flicker to life at 12:01am MST, Friday, November 7. Those preorders will then ship to 200 dedicated fans on Wednesday, December 3. All of this Lady Death excitement is leading up to a major announcement on Friday, December 12, and an appearance at Phoenix Comicon’s Fan Fest on the weekend of December 12-14.

If you thought the first 20 years of Lady Death were intense, strap in –– the thrill-ride is about to begin. Mark that new beginning with this special Scarlet Edition PVC Statue!