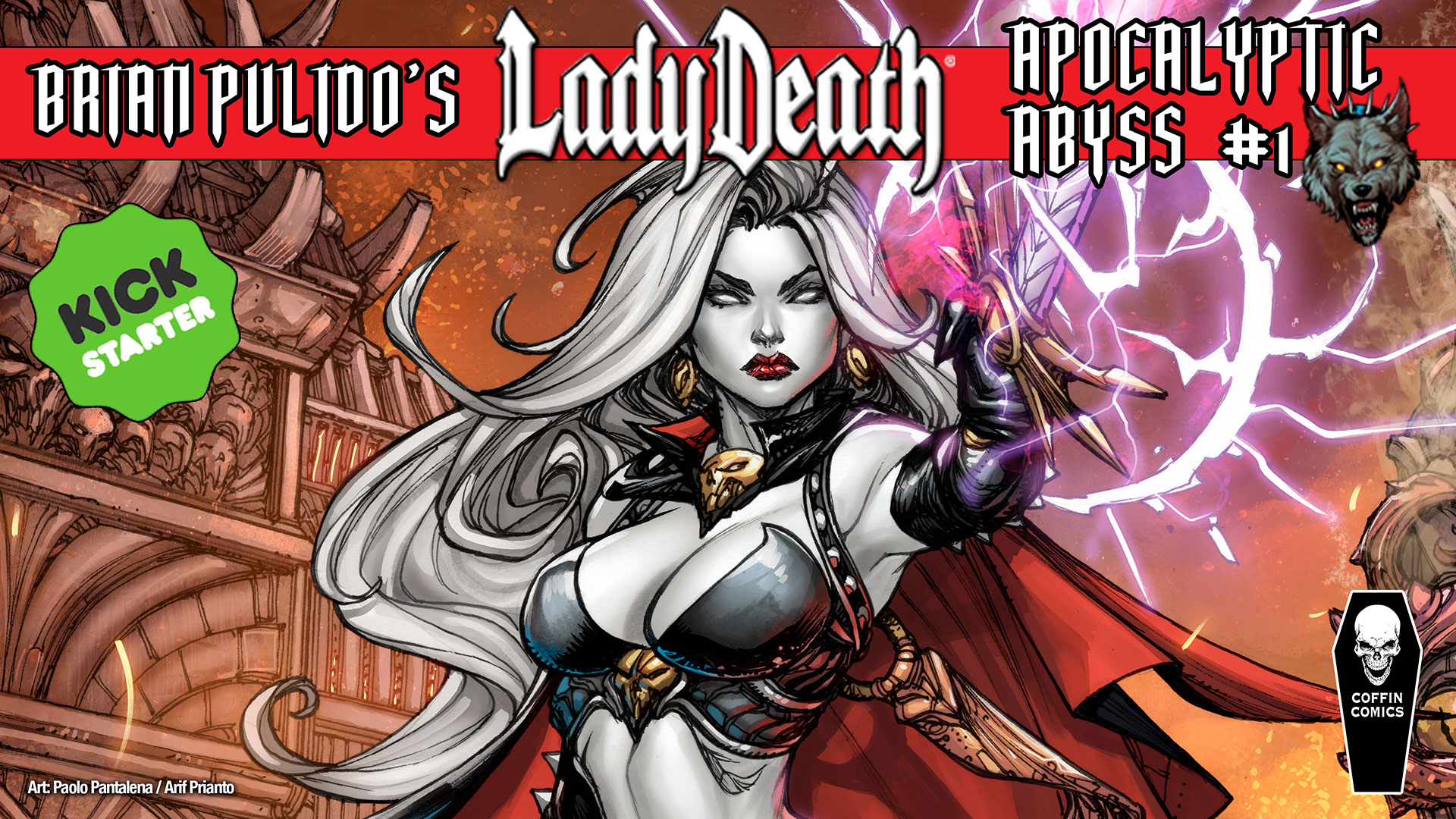 JIMMY CALABRESE: Love that title Apocalyptic Abyss! It sounds so METAL! Where do you come up with these great titles?

BRIAN PULIDO: Haha! I spend as much time on the titles as doing the entire story, but I can’t take all the credit. Mike MacLean has come up with some rather cool ones too ( Damnation Game, Oblivion Kiss)! Mainly, I ponder the story’s theme. At the same time I actually have a list of powerful words standing by that I would like to use. Then I go looking at the names of heavy metal songs and lyrics and see how I can mix it all up!

JC: Can you tell us more about Hellraiders? The first time we heard that term was during the last Lady Death Kickstarter as the title of the comic book that Coffin Comics gave away as a stretch goal! Who came up with that name?

BP: Francisca Pulido coined the term Hellraiders. It captures the spirit of the characters and their goal: to raid Hell and bring Lady Death back to earth! Why Lady Death? You will have to read to find out!

JC: This story sounds like it’s going to be the most violent yet! Should we worry about some of our favorite characters making it out alive?

BP: It certainly bolsters my confidence. To know that I am connecting with the readers, fans and collectors really fires me up.

JC: Is there any truth to the rumor that the character Gunnar is based off the new Judas Priest guitarist?

BP: If you take a look at pics, you can see a similarity.

JC: It seems like everything has been leading up to this story! Lady Death while surrounded by Hellwitch and her army, in the last panel of Unholy Ruin, state that they will make a “final stand”. How important is this story to the Lady Death story’s arc?

JC: Wow. So, what comes after Apocalyptic Abyss #1?

BP: This August 2018, we unveil the Lady Death: Nightmare Symphony #1 Kickstarter campaign. That is all I will say for now.

The NEW Kickstarter, LADY DEATH: APOCALYPTIC ABYSS #1 launches on February 7, 2018 at 7:00PM MST/PDT (Arizona Time) in conjunction with the month long celebration of the Lady Death #1 24th Anniversary release! Kickstarter backers will be the first to read the new story, months before it’s released to the general comics market!

“RAID THE WAREHOUSE” – LAUNCHES THIS FRIDAY! 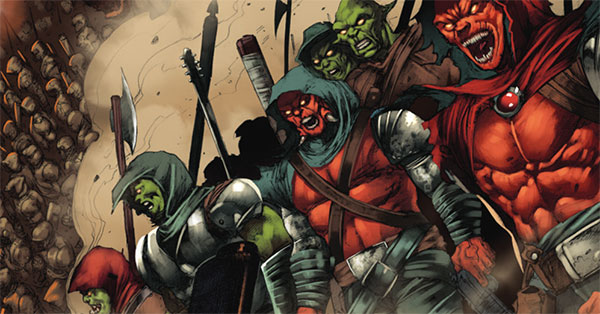 We can’t hold them off any longer! Grab what you can and save yourself! 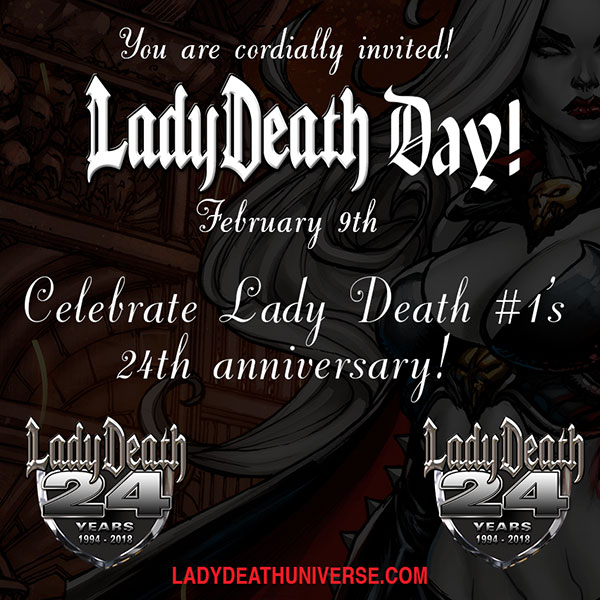 We’re stoked to announce that NOW AND FOREVER that February 9 is officially “Lady Death Day”, where we celebrate the release of Lady Death #1!

Bring your comics, merch and apparel around with you on Lady Death Day (February 9) and SNAP PICS & POST THEM to social media to WIN PRIZES!

If you don’t have comics, merch or apparel, stay tuned we will have something for you!

This show is FREE TO ATTEND!!!

New exclusives by Mike DeBalfo, Jeremy Clark and Sanju Nivangune are coming! MORE to be announced!

This will be Brian Pulido’s ONLY appearance in AZ until Phoenix Comic Fest in May! Be there! 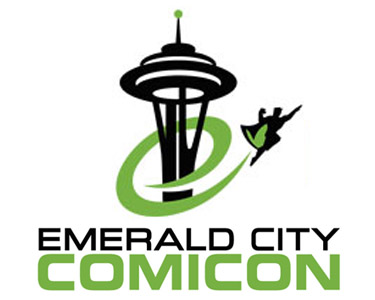 MONTE MOORE AT THE FINE ART ART EXPO IN ARIZONA! 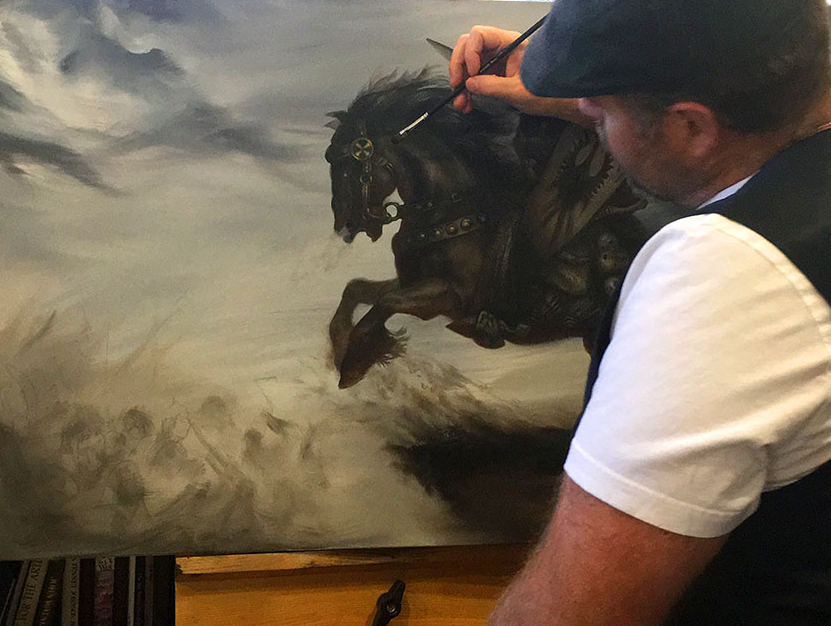 You know him as the Lady Death All-Star Artist but his wide-ranging professional art career has spanned over 25 years and multiple genres! Monte Moore is currently exhibiting new Western Cinema themed fine art for 10 weeks in Scottsdale Arizona Jan 12 – March 26th at the Arizona Fine Art Expo, so if you are in the Phoenix area, please come by and visit and check out all the NEW artwork!

Monte M. Moore has been a professional artist for over 25 years working in both the fine arts and commercial arts industries. During his wide-ranging career he has created licensed work for noted companies such as Lucasfilm Ltd. Harley-Davidson, The United States Marine Corps, The Boy Scouts of America, Monty Python, Barrett-Jackson Auto Auctions, The National Finals Rodeo and many others. His art has been featured in eight art books exclusively featuring his art as well as magazines such as Time, Newsweek, US News, The Robb Report and has won the World Fantasy Art Show twice for Best Black and White Art.